We have definitely reached that point in the winter where it’s starting to feel like it’s dragging on….and on… While the days are getting noticeably longer, there’s still no going out on the patio for anything other than to take out the garbage or let the dog out to pee.

We have been stir crazy since the holidays wrapped up and so we did what any good blogging couple would do – reimagined our space. Here’s a look around our newly styled Winter White Living Room. And just to keep things real, this is real weekend winter light! As in, taking interior photos in January in Canada is a hard thing to do…so let’s just embrace the dusky feel of this room, because that’s how it actually is at this time of year!

It all started when we took down the Christmas red drapery panels I had sewn for the holidays and replaced them with white and black gauzy panels I had tucked away after a visit to Ikea last September. 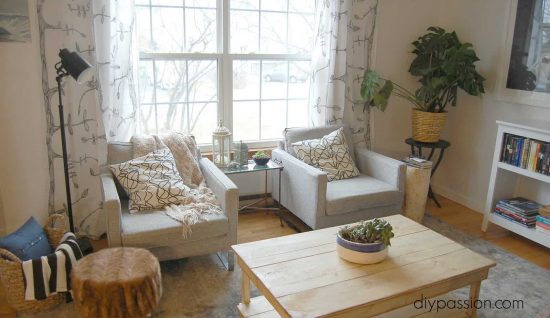 Over Christmas, we both lamented this house’s lack of ‘mantel’ – we used to have one in our old teeny condo and we miss the ambience. So, when the tree went, so began our plans to ‘fake’ a mantel area. That meant moving the china cabinet to the planked wall corner. 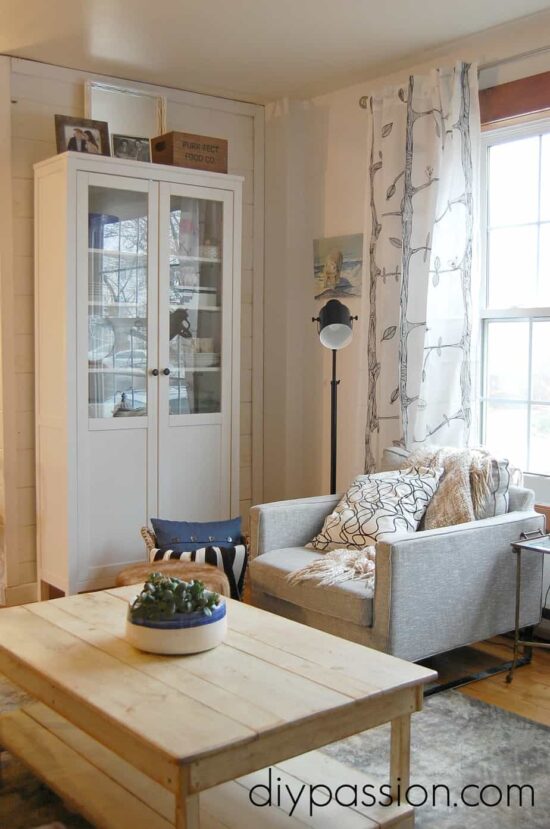 And replacing it with two low bookcases from Target (RIP…OMG… devastated about the Canadian Target debacle).

The entry of these bookcases into our lives was really prompted by a relatively significant project that is happening on the second floor right now. We cannot WAIT to show you. (Hint: It’s the big start to our master bedroom renovation!) And above the bookcases, of course, our new wall gallery consisting of our recently revived Harvey Edwards and our DIY Drawer Shadow Box Shelves.

We put the couch back in its optimal position of ‘floating in the room’ and realigned the club chairs to be equidistant under the picture window. Seriously, if you are struggling with layout in your space, our number one recommendation is to pull your furniture away from the walls. Lots of people feel inclined to have every piece of furniture touching a wall – but rooms feel much better when at least a few items float and mingle among the humans.

Speaking of struggling, the urge is strong to slipcover our couch in a warm white cotton canvas or replace it entirely with a new slipcover couch. What do you think? Some days the grey feels like it sucks up all the energy in the room. PLUS – we bought this couch pre-Buddy and it’s sooooo not dog friendly AT ALL. Let the waffling over the couch issue officially begin.

A new blanket basket bought on sale at Michael’s, a small iron and glass table that we’ve had forever and, of course, Larry the log – round out the room by adding texture and functionality. 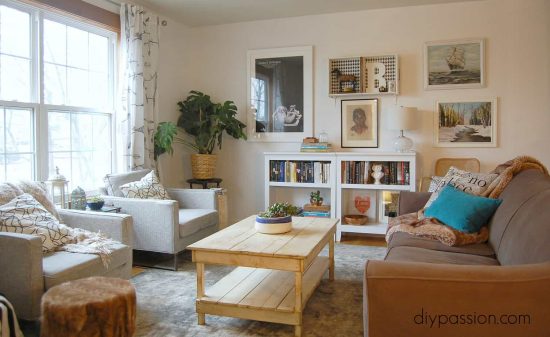 One thing we’ve always strived for (but admittedly struggled with) in styling our room is the concept of ‘layering’. It’s a little more nuanced then just floating furniture and is more about placing objects deliberately so they are functional, but also relate well to their surroundings. I think we are getting closer to achieving a naturally layered look with this latest living room iteration… Yay.  🙂 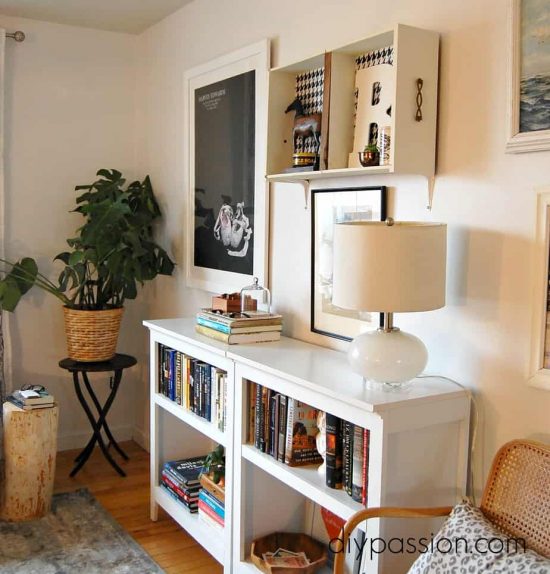 So that’s that! It’s simple. Straightforward. And, if we’re being honest, ready for a splash of spring colour!

Do you decorate through the winter doldrums? Have you recently reimagined your space? Let us know!