{Warning. This post will talk about boobs. If you aren’t into that, I won’t be offended if you skip this post and wait for the next one. I’ll be back in a few days with something non-boob related, I promise. Also, this post is lengthy. I guess I had lots to say.}

I announced last week that I wanted to start writing more about ‘family’ stuff. Well, there’s something I really need to get off my chest…and yes, it’s about my long journey to ditching Mom guilt and what I’ve learned about formula feeding.

When you’re expecting your first baby, you casually start reading things on the Internet about ‘being a Mother’ and inevitably you come across an adage regarding ‘feeling like a failure’. I balked at ALL of them. I told myself that I’d cut myself slack, know I was never going to be perfect and so long as my baby wasn’t starving, cold, sick or neglected – I’d be doing a-okay.

Man. Was I high and mighty. Because basically from the day Little Bird was born, I have felt like a failure at least once every single day.

Maybe one day I’ll write about Little Bird’s birth story, but for now let’s just say it started with a bang, was tempered by some good drugs, but ended with an emergency C-section. Within the first 48 hours of her life, we discovered she was pretty badly jaundiced AND had a significant tongue tie. The combination of that was a one-two punch that, to be blunt, SUCKED BIG TIME.

The jaundice meant she had to be incubated under UV lights and we couldn’t take her out except to feed her. It also meant we had to feed and feed and feed her because that’s the best way to get rid of jaundice. The tongue-tie meant she would not, COULD NOT latch to nurse. The C-Section meant my first time Mom milk supply was slow coming in. Fast forward to our first full night in the hospital and my baby was losing an unacceptable amount of weight and just would not nurse. After just 36 hours, she had lost MORE than 11 PER CENT of her birth weight. (Hint: That’s not average, normal or healthy)

After three days, one nurse recognized the dangerous path we were on and immediately provided us with supplemental formula. With the extra nourishment, Little Bird was doing better at kicking the jaundice and was starting to regain the weight. And I started to breathe a bit easier.

This should be characterized as a mothering win. I advocated for my baby. I knew something was wrong. I was aware of our physical limitations. But I still found myself falling into the guilt trap.

When the public health nurse came by the house a few days later, she insisted I show her ‘our latch’ and gave me three pages of notes on how to get Little Bird off formula as soon as humanly possible. When she left, I felt so uncomfortable. Like I’d forgotten to advocate for my family all over again.

What if I wasn’t worried about a blend of formula and breast milk? What if I invited the possibility of Dan feeding her in the middle of the night so I could rest? Where was the support if that’s what I wanted? Was I only being supported if we were trying to nurse 100% of the time? 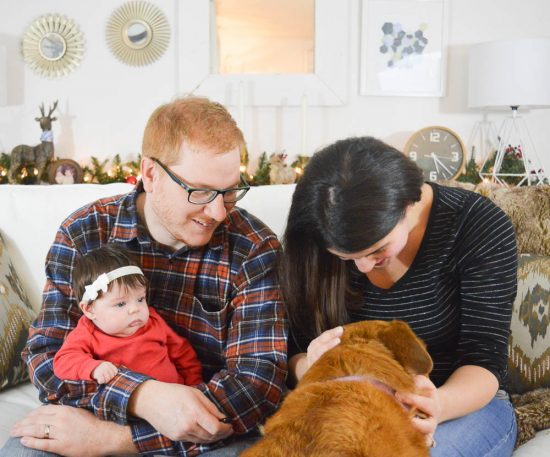 They told me to squeeze, pump, push, pull, compress, decompress, let down, buck up – don’t FAIL.

Well. We squeezed, pumped, pushed, pulled, compressed, decompressed, let down and bucked up… and still.

Little Bird wasn’t gaining enough weight. We were at the doctor’s office twice a week to weigh her. It was clear to me the nursing wasn’t enough, but every time I’d brooch the topic, I was met again with ‘just keep trying’.

This is ideal. They’d say. This is BEST. Grin and Bear it. (<– I found that to be the most condescending of comments.)

Do you want to know how many latches were humanly possible? 26.

26 latches  in the middle of the night when Little Bird was just shy of three weeks old, my nipple burst open like overripe melon and bled all. over. my baby. me. my bed. ALL OVER.

You know what’s almost as traumatic as an emergency C-section?

Bleeding from your breasts. Wait, no.

Bleeding from your breasts while feeling like everyone is telling you that you SUCK at feeding your baby while you know there is an alternative that no one will really talk to you about or teach you how to do properly.

I had a pre-scheduled check-in with a public health nurse the next morning, so I mentioned the bleeding and that I was hitting a wall. She said to take a break and try nursing again in a few days when the scabs had healed. She said to pump every single time I gave Little Bird a bottle to ‘ensure success’ when I restarted weaning her off formula.

I got off the phone and bawled. I was losing my mind. Slowly. Like a drip from a broken tap. I couldn’t just sit there and wait for scabs to heal over and try again.

Little Bird was feeding almost every two hours at this point. Giving myself a few days to heal would mean prepping bottles to feed, prepping bottles to pump, feeding, pumping, washing, sterilizing, repeat. That was WORSE than just doing one or the other.

Oddly enough, it was my Mother (and not a licensed health care professional) who saved me and Little Bird from falling off the edge of nursing induced insanity and starvation.

She said “No one can say you’re not doing the right thing. You’ve pushed harder than a lot of mothers push. You know what she needs. Feed her, cuddle her and fatten her up. Breathe and just start giving her bottles. Just be her Mamma.”

So we moved to a 60-40 formula/nursing split. Eventually, she started only asking to nurse to pacify her between regular feedings. She is now 13-weeks old and this is still how we do it.

Even after all the heartache, I still didn’t feel comfortable talking openly about how I was feeding my baby. Too many voices were standing out there, like rabid dogs, waiting to tear down my choices and highlight my failures. Even if it’s unintentional, the daggers that come alongside well-meaning advice with respect to breastfeeding (or NOT breastfeeding) hurt like hell. I mean, there are dozens of ‘nursing support’ groups out there and a multitude of places for mothers to commiserate about nursing in the middle of the night, cluster feeding, nursing while co-sleeping, nursing in public… but none for the Moms who quietly decide to do it another way. (Many of whom probably fought hard to feel okay doing so.)

Little Bird is chubby and happy. And she gets at least one bottle a day from her DADDY, which to us, is insanely important.

I’ll get over it. Because I know I can’t be alone. There have to be other Mammas out there with similar experiences. I just wish there was a louder voice for us or a club or at least a t-shirt or something, you know?  Being a new Mom is terrifying and wonderful and the cloak of guilt is just unnecessary.

Here’s what I’ve learned about formula-feeding:

Ladies… Just be your baby’s Mamma…. that’s the best advice I received and that’s the most heart felt advice I’d ever dare give to you.

Here are some other posts you’ll enjoy