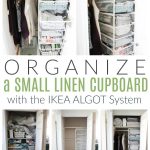 Inside: How to organize an Ikea linen cupboard using the customizeable Algot system; this transformation happened in half a day and made such a difference!

Things are slowly clipping along in this DIY house. With summer finally arriving, we are focusing more attention on a couple of large projects outside (like a new patio pad and some landscaping), but I still have a few smaller organization projects to pull together before the Fall – one of which is our small linen cupboard. I know, it’s barely 20C and I’m already thinking ahead to the Fall, but we all know that once September hits, all bets are off until January right? LOL Today, I’m showing you how to organize an Ikea linen cupboard and do it in just half a day! 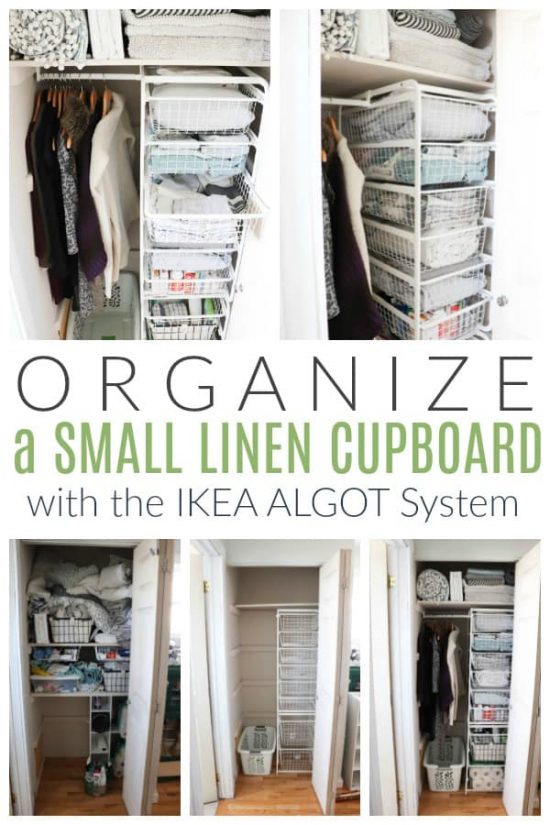 How to Prepare to Install an Ikea Linen Cupboard

Last week, I was lucky enough to have one whole week day to devote to organizing. LB was at day care, Dan was at work, the dog was hanging out on the back deck – so I focused my attention on the beast that is our linen cupboard. My only aim was to organize it and make it functional again. Eventually I want to make it pretty by painting the door, fixing the backwards hardware and adding some pops of colour with paint – but for now, functional and clean is where it’s at.

This was the before. OMG. 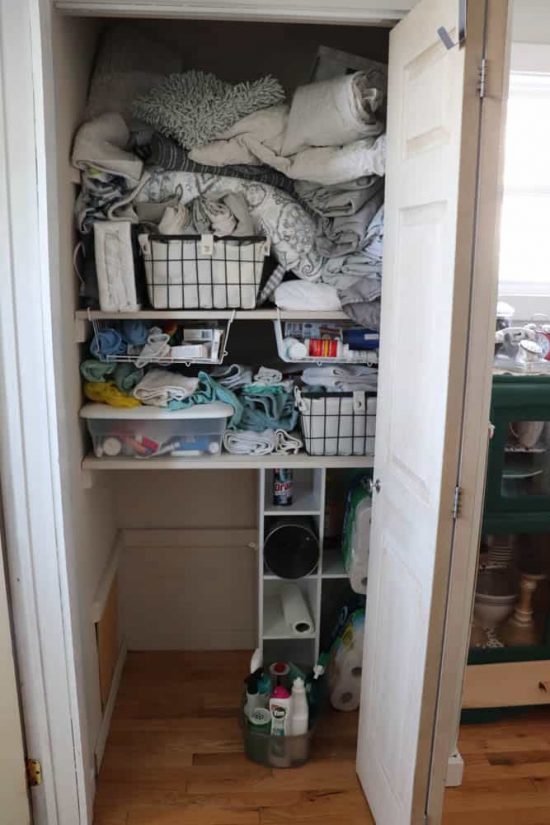 It was just a bunch of basic shelves across a 3-foot wide cupboard. Nothing stayed folded, things were incredibly hard to find because the cupboard is 30″ deep. I finally got fed up when I went to find a hand towel and ended up buried under a pile of bed linens.

Off to Ikea I went. I did some research and settled on the Algot free-standing system. This system has been around for a while and it comes in two forms – one that actually screws right into the walls and another, for smaller spaces, that is self-contained. While I could have gone for the more robust closet solution, I went for the free-standing one because I knew I could assemble it and get it organized in much less time. 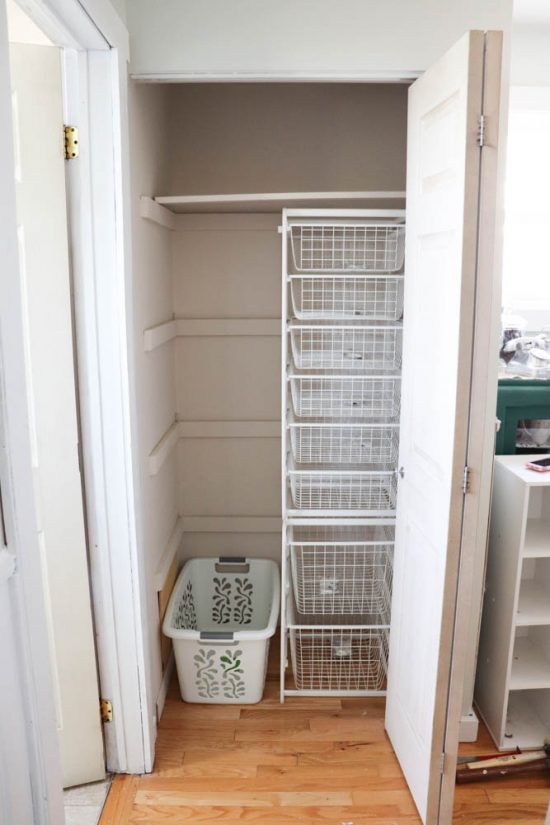 I chose the combination with two sets of stacked baskets on one side and a hanging rod on the other. I was SO excited when I measured and realized this would fit closets between 32″ – 42″ and that it was tall enough to allow me to use the pre-existing top shelf, saving me a few bucks in buying a new Algot shelf and/or having to rehang a shelf in a different spot. I love when the Universe creates DIY efficiencies!

My primary concern was that our laundry hamper fit on the left. We’ve had our hamper there since the day we moved in and I didn’t want to break the habit of tossing our towels there – it works so well for us. And, to be honest, I didn’t want the mental hurdle of forming a new habit and enforcing that new habit with Dan! LOL Needless to say, I was overjoyed to see the hamper fit right alongside the Algot. Win. 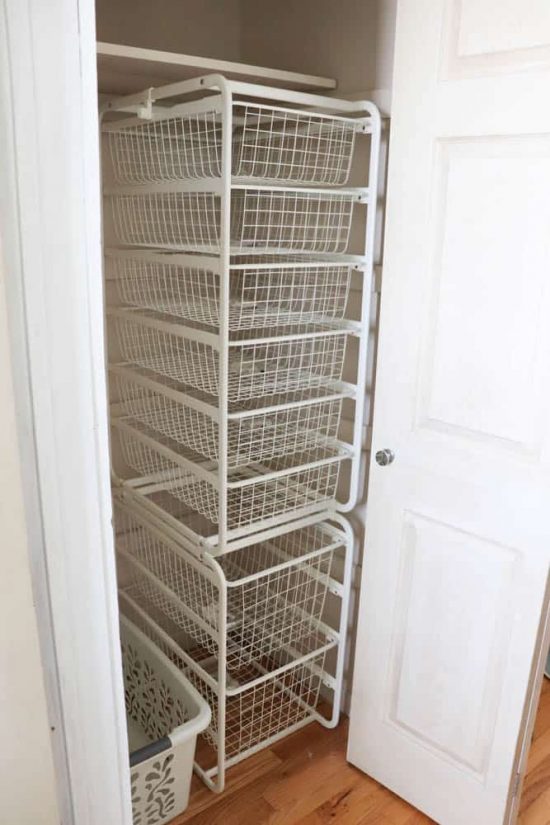 How to Organize Linen Cupboard Shelves and Drawers

The baskets are great. I used the bottom two deep baskets for toiletries and cleaning products. The drawers come with a lock as well, for added safety. Though – I think I’ll move the cleaning stuff up higher soon. LB can’t open this door yet, but I anticipate she will be able to do that soon and I don’t want her to be able to reach anything dangerous. 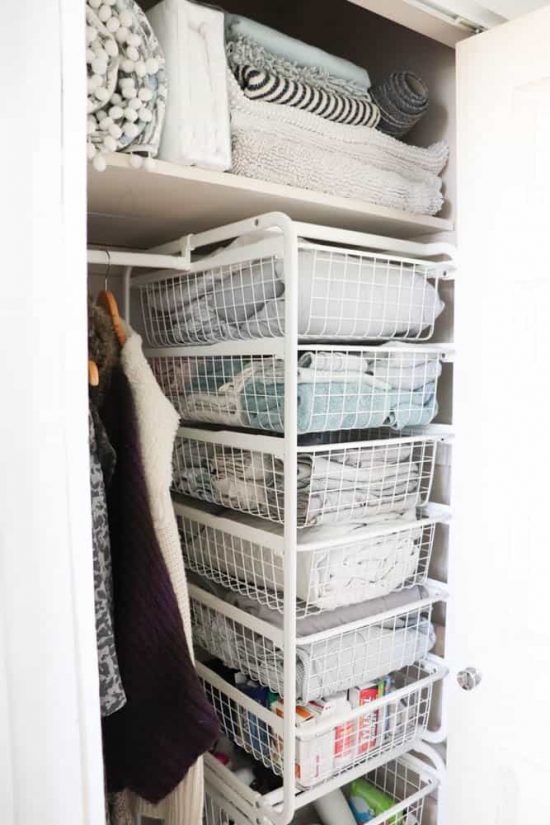 The top shelves are now home to our sheets and duvet covers. I realized in this process I have way too many duvet covers. I think I went through a period of slight obsession. All of them are shades of white and grey so they are interchangeable on all our beds. Same goes with our sheets, with the exception of the new blush pink set I recently bought. How often do you all change your sheets? I do them every Sunday morning. I love it. 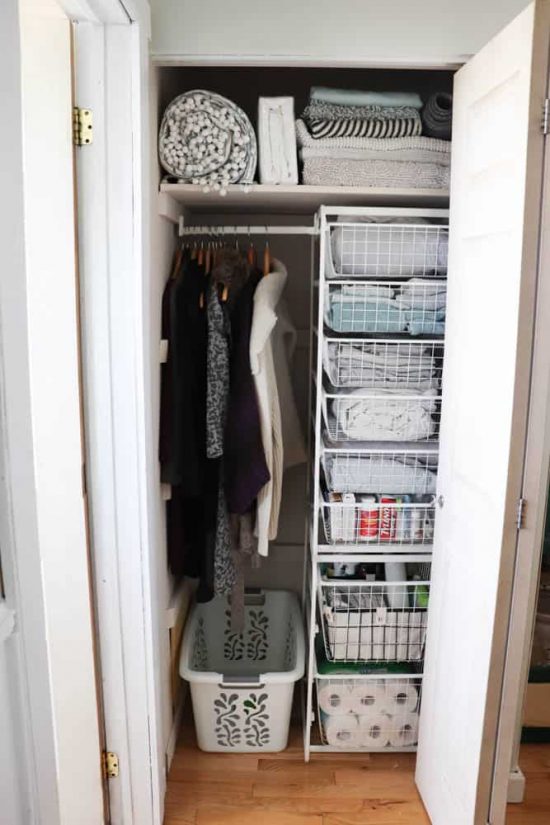 Quilts and floor mats go on top and I also used one of the drawers as a medicine cabinet. We have lots of space in our bathroom, but I find the rarely used medical stuff is best stored outside the bathroom completely. Stuff like bug spray, callomine lotion, headache remedies etc. Again, I think I’ll move that drawer to a higher position soon – because danger. 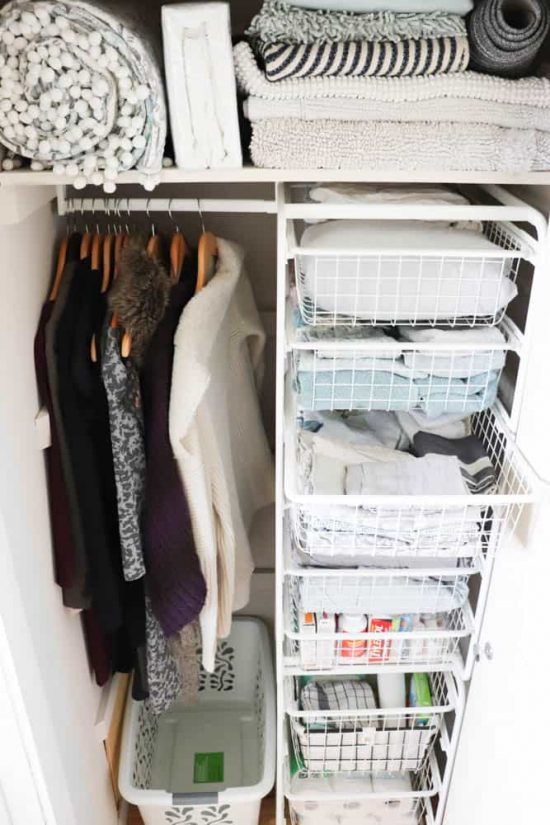 Lastly – the hanging bar! Man! Things I didn’t know I wanted until I had!! For years I’ve been storing my big winter sweaters in a box in the basement storage area, but I always wanted to be able to hang them up. This house is short one closet. I’ve always said that. But now, with this hanging bar, I’ve created enough space to hang up my wool dresses and sweaters for the season!! Plus I don’t have to lug them down the stairs anymore.

This solution cost me around $150 CAD including taxes. I’m pretty happy with how it all turned out. My next organization task is going to be in the laundry room. Who knows when I’ll get to it, but I have wanted to fix up our cleaning and tool cupboard for YEARS. 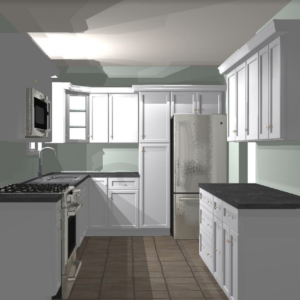 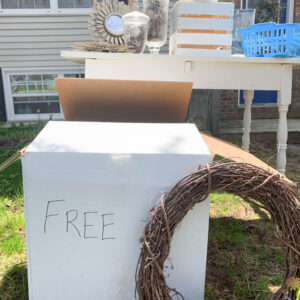 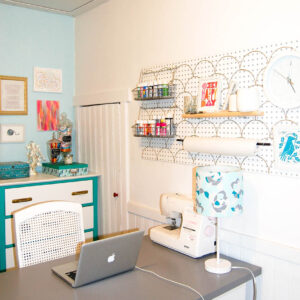 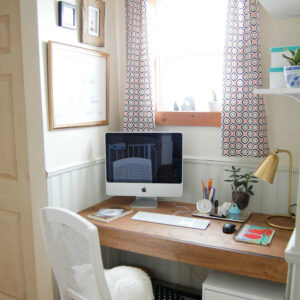 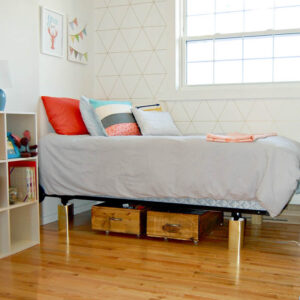 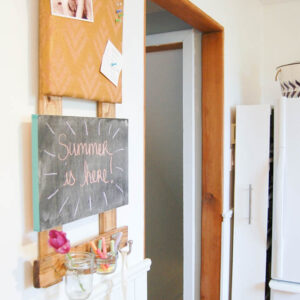 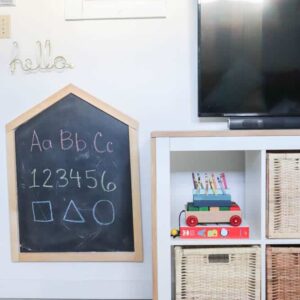 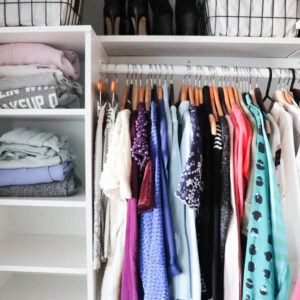 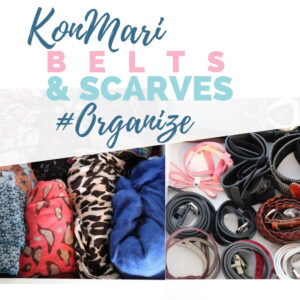 How to Declutter Belts and Scarves with the KonMari Method