Considerations for Demolishing a Two-Storey Deck

There’s something so incredibly satisfying about watching a dilapidated structure come down knowing it’s going to be replaced with something beautiful.

I live for demo days.

They might be my favorite part of any home renovation project.

Demo days mark the ‘no going back’ moment in a reno when you’re all in on your big vision and the creative, messy, rebuild process begins.

We’ve been through many demo days as a family. First was our porch-turned-office and then in 2020, when I had a 12-week old and a three year-old, we demoed our kitchen!

This demo of the back deck was slightly different.

We didn’t have to pack any cupboards up or rearrange our living quarters (or move out, as was the case with the kitchen renovation).

But we did have to clear everything out of the demolition zone in the yard.

It took us about 45 minutes to unhook the garden hose, move the deck boxes and a few planters out of the way…that was it!

The more important consideration for a backyard deck demo is to make sure you’re prepared for the noise!

The kids were at school when it all began, but the chainsaws did bother Banjo a bit, so I made sure to keep him close by and had lots of treats to calm his nerves.

He settled after about half an hour and it was all good.

The only other thing we needed to do was move our vehicles from the driveway!

What we discovered during the deck demo

Well, we sorta knew this was going to be the case, but as soon as the contractor began to chainsaw and chop through the old deck, they confirmed it was not to code, not safe, and basically just waiting to collapse.

Thank goodness we hadn’t been using it!

Other than that, demolition of both the front and back decks took a crew of three men about 2.5 hours.

The first thing I’ve learned about simplifying demo day is to leave as much to the pros as you can. And by that I mean the work and the logistics.

Working with the Home Hardware Home Installs team meant I didn’t have to do any of the coordinating of the crews and contractors, the dumpster delivery or any of that.

It’s all done for us!

Once the debris was taken away, the crew was able to bring in a piece of machinery called a helical drill.

Basically, it’s a super digger-drill to ensure the footings for the new deck are in at the right depth. It also saves the crew having to hand dig holes and speeds up the whole process.

To be honest, at this stage, it’s still hard for me to visualize what the finished deck will look like!

Up next is the framing! I think at that point, it’ll start to feel like it’s coming together. 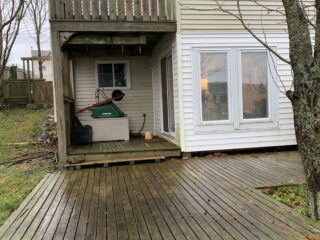 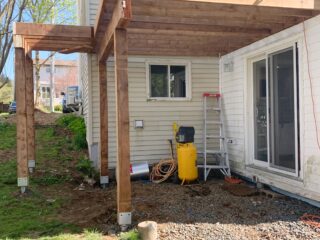