How to Hang an Alphabet Wall

It has been a while since I’ve written out a how-to tutorial for one of our projects – in fact, since before Little Bird was born, so I figured today was a great day to answer one of the most common questions we’ve had since we showed off the nursery….(Okay, for real – I meant to post this before I had the baby… but you know, I had a baby…and then I kinda forgot  – whoops!)

How to Hang an Alphabet Wall! 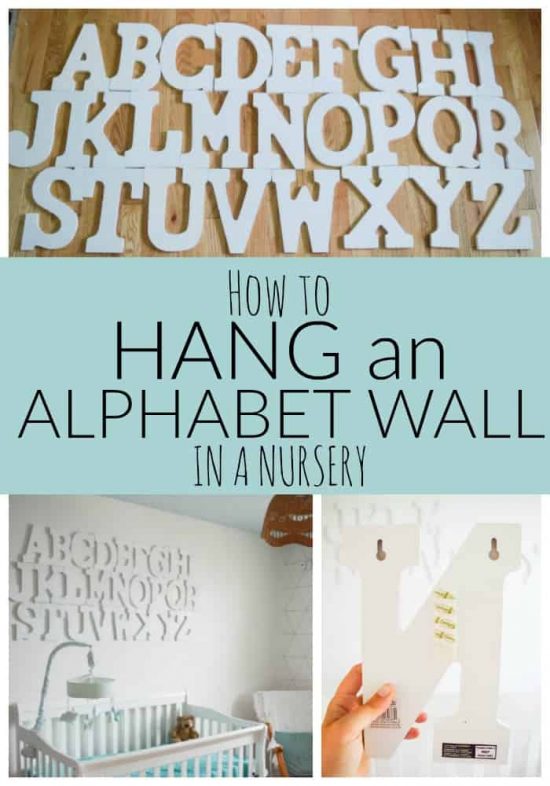 Pretty much everyone has commented on the wall art and I’m happy to say it wasn’t as hard to pull off as it looks. It did require a fair bit of measuring, but other than that, it was mostly just patience and paying attention (not unlike the $8 geometric wall we also put into the nursery!)

Here is the supply list for hanging an alphabet wall:

The supply list isn’t huge. The trick to this project is more in the planning of the wall. In our case, we wanted it to float above the crib. Cue the danger alert! We knew it couldn’t sit so low to the crib that Little Bird would be able to pull an R down on top of her in the middle of the night, but we didn’t want it so high up on the wall that it looked weird. 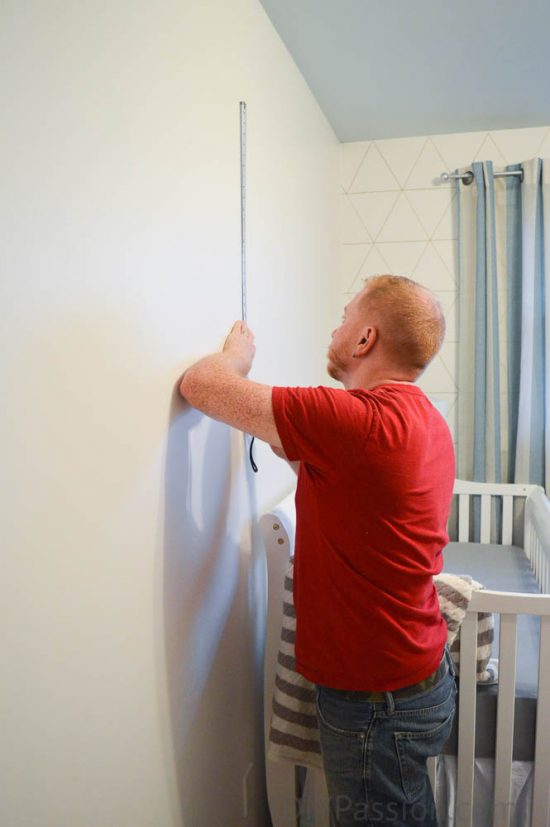 We also wanted it to be a good length so we could use it to centre the crib and trick the eye. Our crib is not centred on that wall because we wanted to have space for the rocking chair and side table, so the alphabet wall serves to distract the eye from the lack of symmetry. 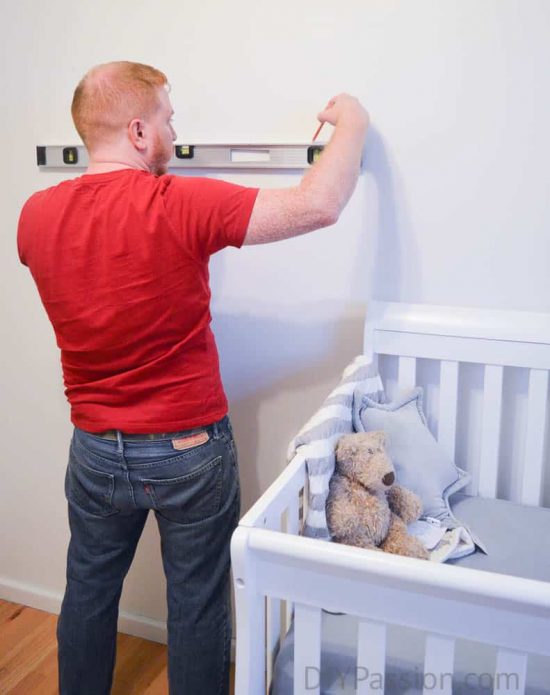 I actually found laying all the letters out on the floor to be the best way to make sure it didn’t look weird. I really wanted to have four lines of letters because I wanted it to look ‘chunkier’ but the measurements just didn’t work out. (Okay, I flubbed and bought letters one size larger than I intended which meant that my initial in-my-head measurements were completely wrong. This is why Dan is measuring in these photos… because, if I remember correctly, I was pregnant crying at my own perceived stupidity.) Moving on 🙂 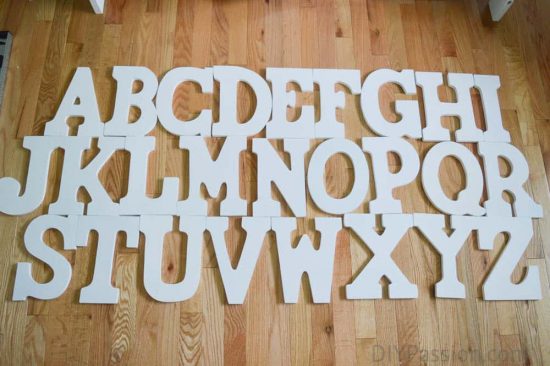 Once we had a simple pencil line grid drawn on the wall (bottom of all the letters, top of all the letters, far left and far right) we started placing our letters carefully on the wall. I DID NOT want 26+ holes in the wall (though I’m not afraid of making a few holes… just not THAT many), so we bought these nifty Command Strips that are super strong. They are basically velcro. 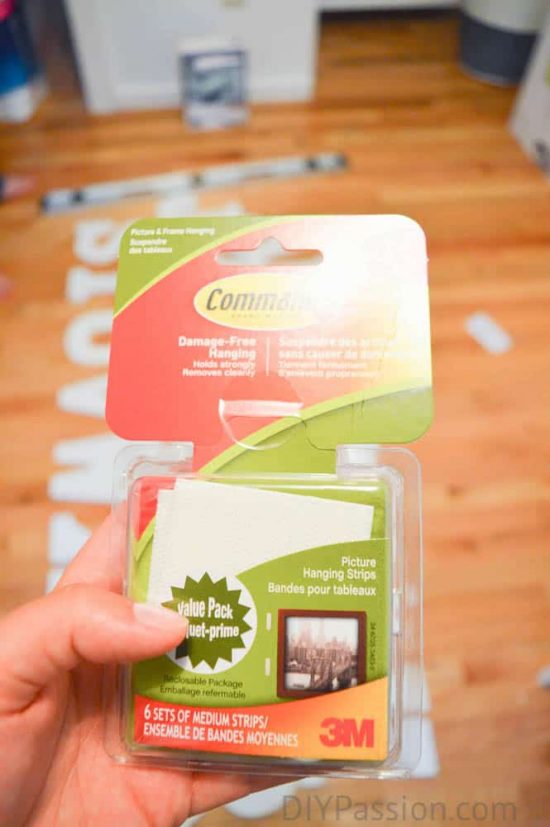 We started on the bottom row – but only because I was super paranoid about making sure the distance between that row and the crib was ample. We’d go from left to right SINGING THE ALPHABET, and butting each letter up against those beside it. We’d check for level too. 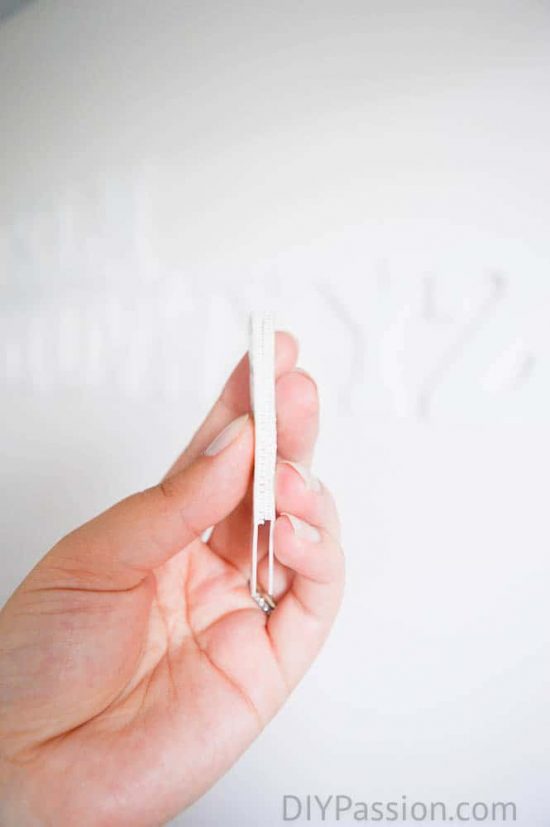 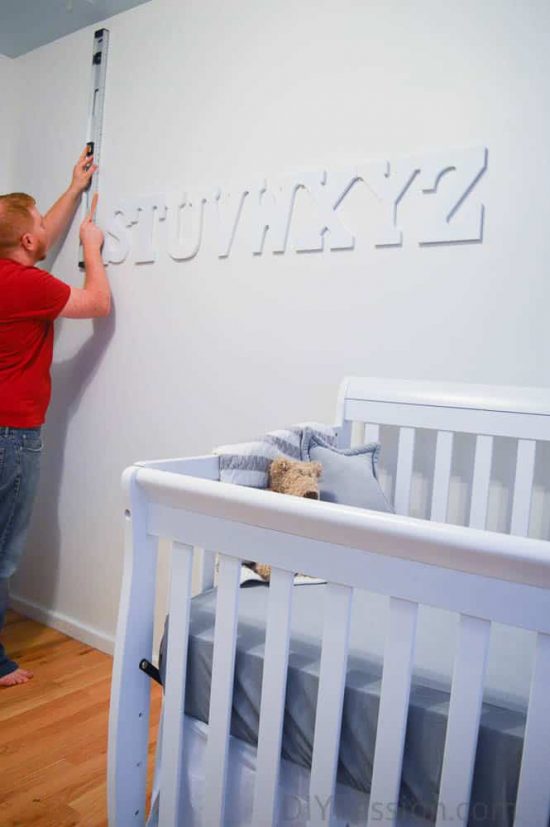 We sang the alphabet because once you put those Command Strips on the wall – they are done. One time use. Don’t mix up your N and your M or you’re gonna cry. 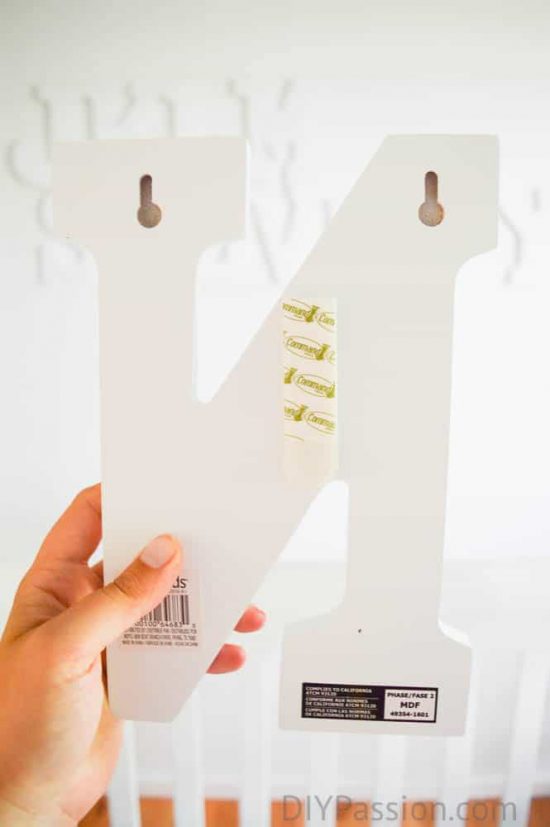 I thought I’d want to paint my letters and had even bought some soft pastel acrylic paint to do it, but once I saw the white tone-on-tone I was in LOVE. All it does is add a subtle texture to the room and it definitely isn’t overpowering like some nursery art can be. 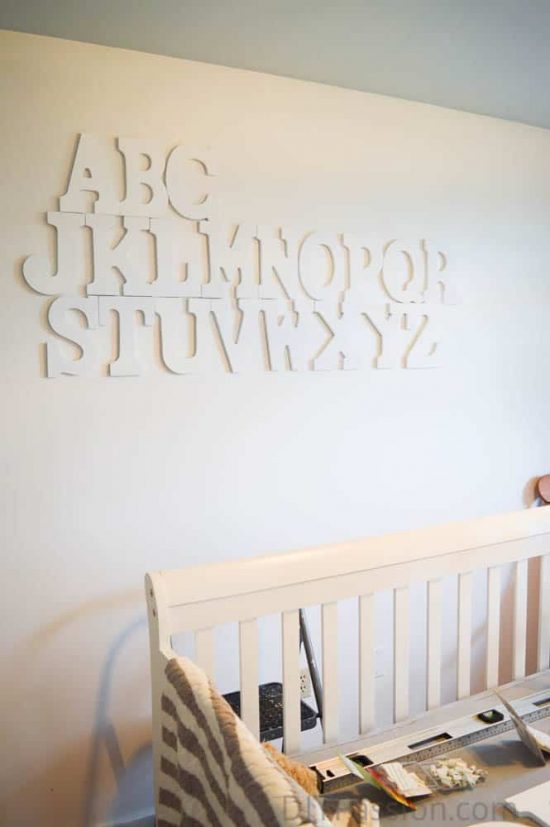 The last time you saw this wall, it was as part of our nursery reveal shortly after Little Bird was born. In fact, those pictures were taken while I was still pregnant. 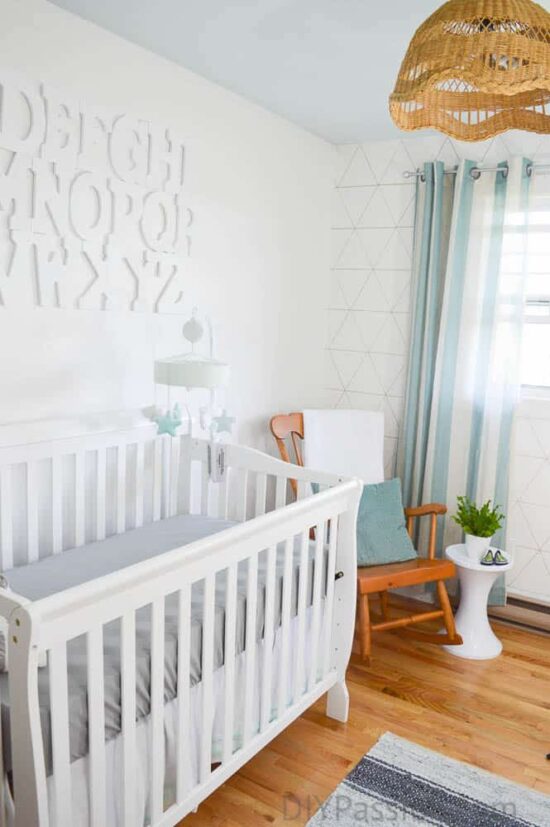 So I took a couple of updated photos this week for you! Lived in and loved to the MAX. Little Bird spends a lot of time in the nursery with us. 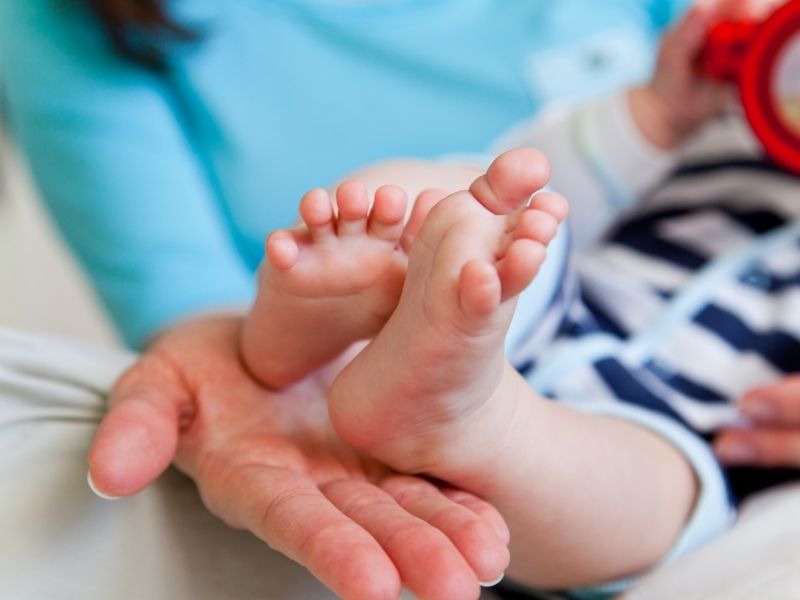 She is still much too little to have noticed the alphabet wall 🙂 But I sing her the ABCs every day! And hopefully one day, she’ll love it! And please excuse the wrinkly crib sheets… because ummmm… let’s just say it was an emergency sheet change …haha #momlife #babiesaremessy 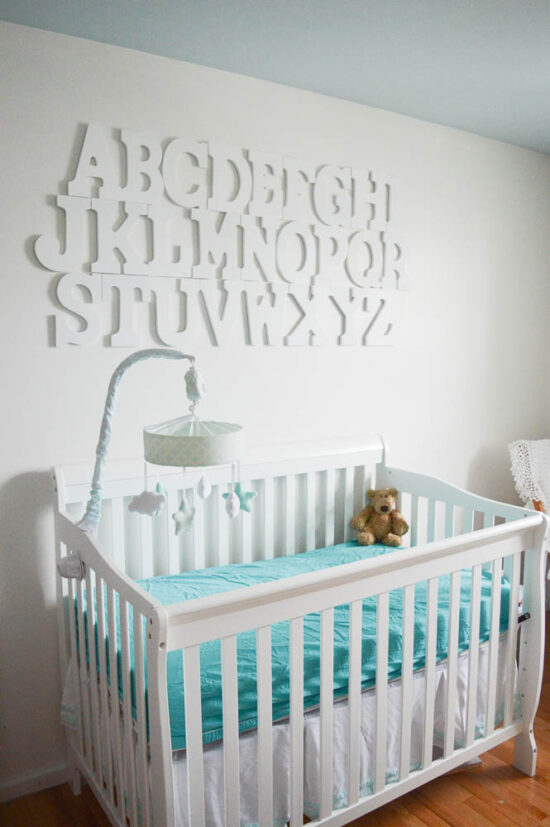 Oh and beyond that – I did up a video on my Youtube channel with a tour of the entire nursery 🙂 You can subscribe to my channel here!

Thanks for reading and please let me know if you try a project like this! It really is one of my faves. 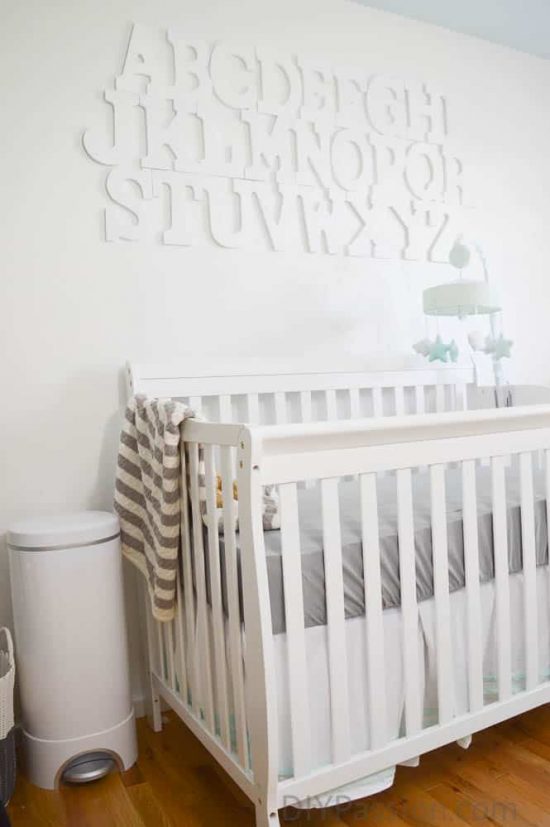 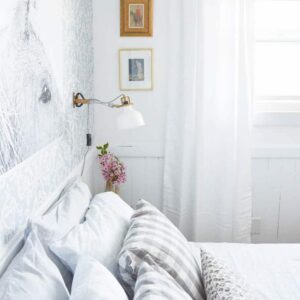 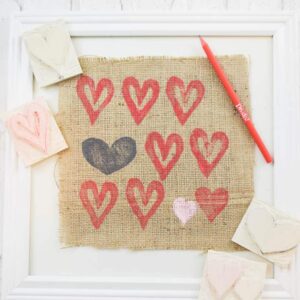 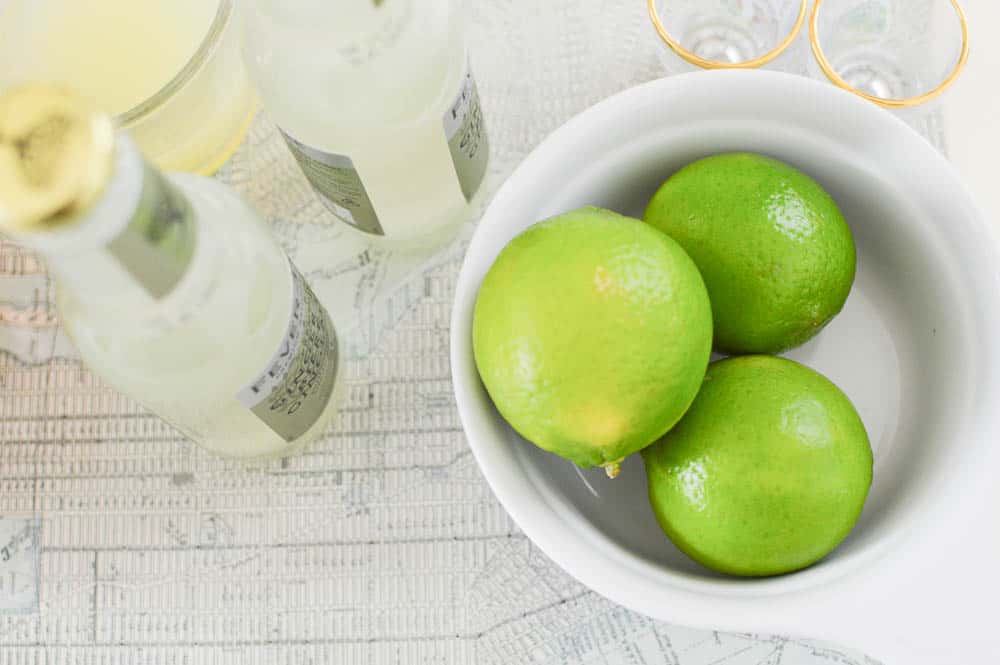 How To Create an Easier Bottle Feeding Routine PLUS a Giveaway with Munchkin Canada! {Family Files}
Read Next Post →
Click here to cancel reply.

This is so pretty, the white on white is so elegant! I did Mr M's name with those same letters and command strips (but painted black and with cars on them haha). Those strips are awesome! It's been there over two years and transitioned from under his crib to beside his big boy bed and they're still holding strong!