How to Paint a Plaid Wall

Inside: Step-by-step tutorial for painting a plaid wall in a corner using four colours of paint; the difference between plaid and checkerboard; troubleshooting crisp paint lines.

I’ve been promising this tutorial post for a while and the day is finally here when I can write about it. Don’t get me wrong, I LOVE my plaid walls in my office – but for some reason, I found the idea of actually writing this tutorial to be daunting. I’ll preface all of this by saying this project was certainly more in-depth than I thought it would be and I spent the better portion of an entire weekend doing it – but the results speak for themselves!

Supplies to paint a plaid wall

Why I chose to paint it plaid

I feel like there’s a reason a lot of outdoor apparel is plaid – it’s a very forgiving pattern and because it has so much going on pattern wise, it can hide a lot of imperfections. My wall is far from perfect. In fact, I spent a couple of weekends before painting it just repairing the drywall and patching holes.

This corner once housed a propane stove that was NOT to code and we had to have it removed when we moved in. Want to see how bad that ‘hole in the wall’ situation was? Have a look at what we needed to do to repair the damage to the vinyl siding.

Yes – the home inspector told us if we’d turned on the stove it would have BLOWN UP the house. So there was a giant hole in my office about the size of a basketball leading to the outside that we had to seal, patch and repair. The plaid pattern was my choice to divert attention from those imperfections. I’ve been quite deliberate with how I designed this small space and the plaid was a huge part of the design concept. 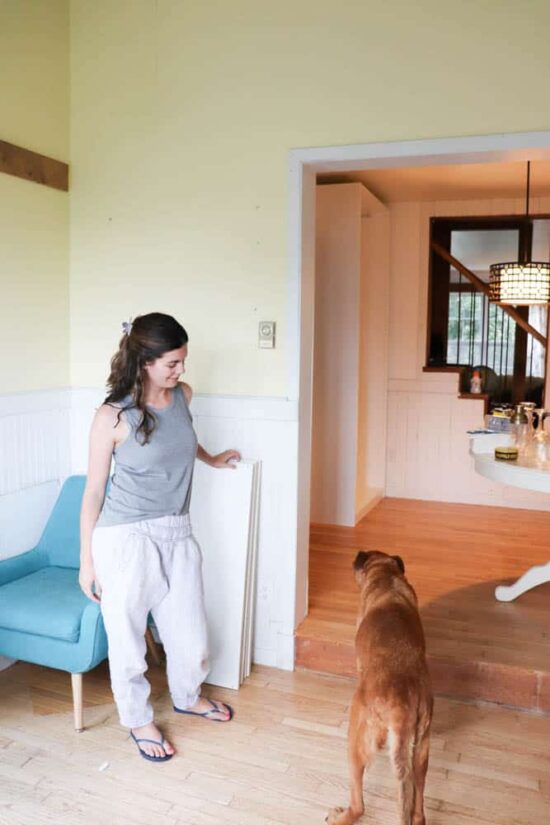 Plaid is also great in a tall or sloped ceiling room because it can create the illusion of a ceiling or wall where there is none. Notice how my plaid pattern stops just above the door frame? That’s because I wanted to make this room with 13′ ceilings feel a little cozier, but still maintain it’s airiness. Drawing a literal line along the mid-section of the room helps with that.

Deciding on the right colours for the plaid

Honestly, this is the most challenging part of the process. I was determined to get it right on the first go and was super concerned that I was going to pick colours that would look too ‘baby blue’ and I would feel like I was in a nursery all day.

My goal was to find a combination of coastal blues that were light and airy, but sophisticated and had a little bit of grey to them. I think the grey undertones keep them from being overly ‘kid vibe’ and ground the colour scheme quite a bit.

I ended up using the Nix Mini Colour Sensor to select a few paint swatches and then when we were in the store, I made my final decision. You can read my full review of this product and the paint colour selection process here.

I ended up with white as the base on the walls and three shades of blue from the same card. 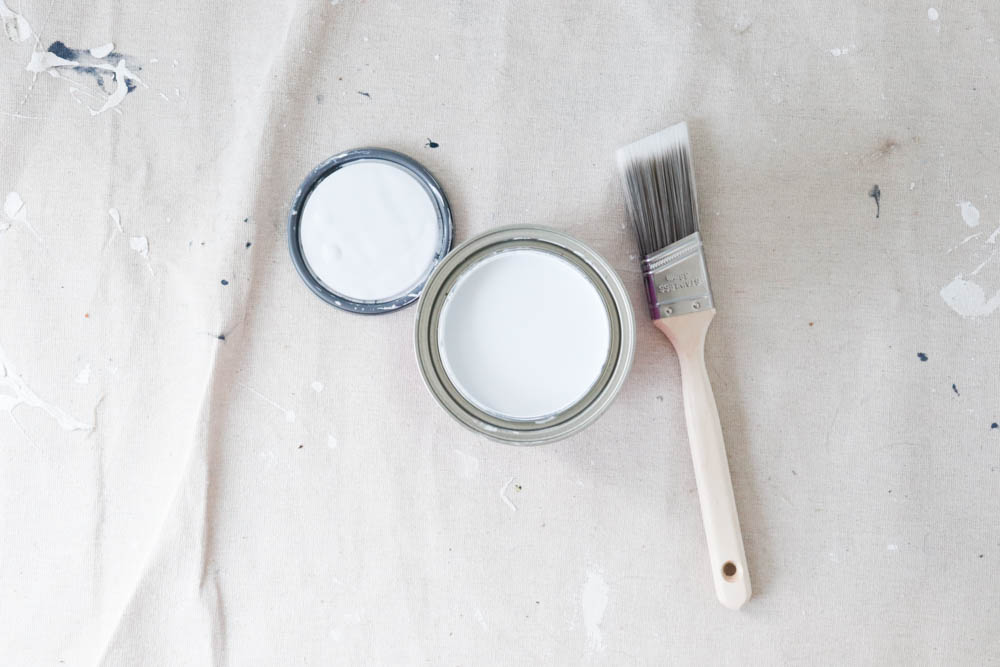 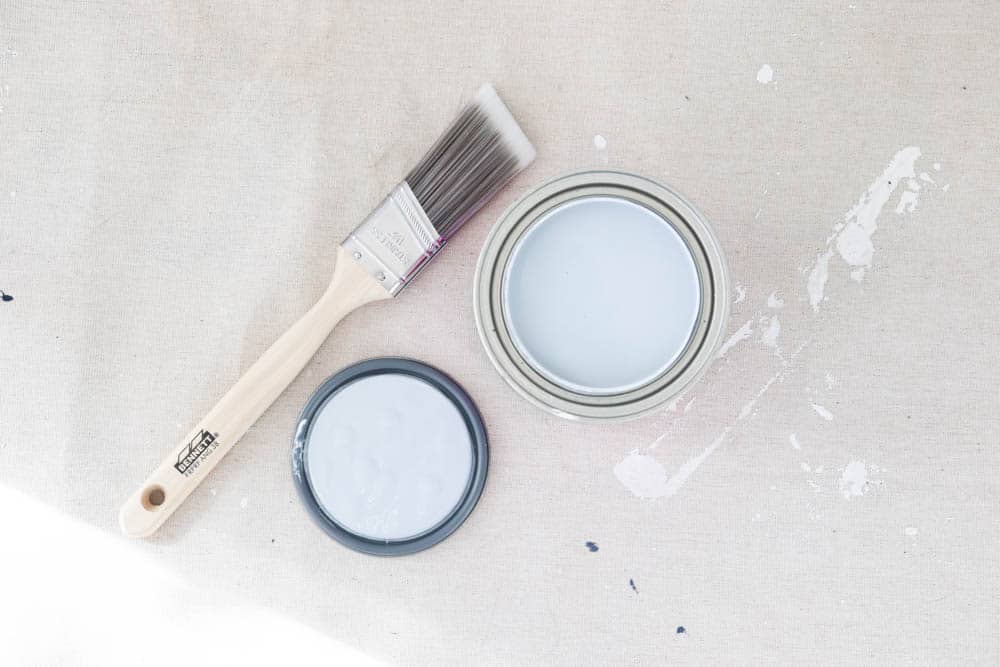 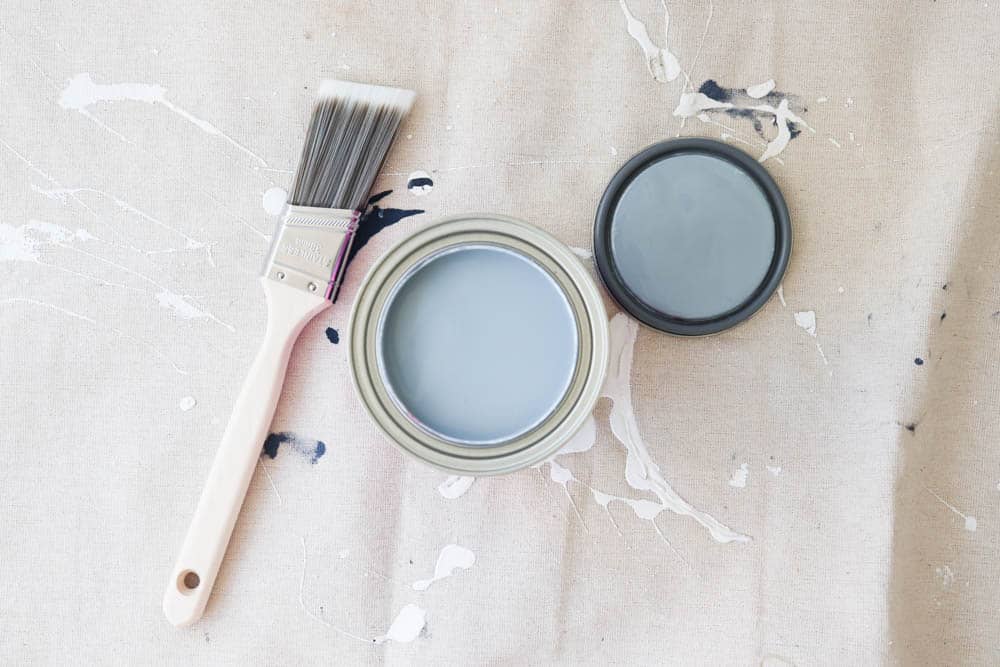 How to position the colours on the wall

Basically a plaid wall is just a grid that you paint in a distinct pattern. Once you nail down your pattern, it’s an exercise in taping off the squares and being patient. I wish I could tell you it’s more than that – but it’s really that simple. I did a similar pattern in P’s nursery with my geometric metallic Sharpie wall. 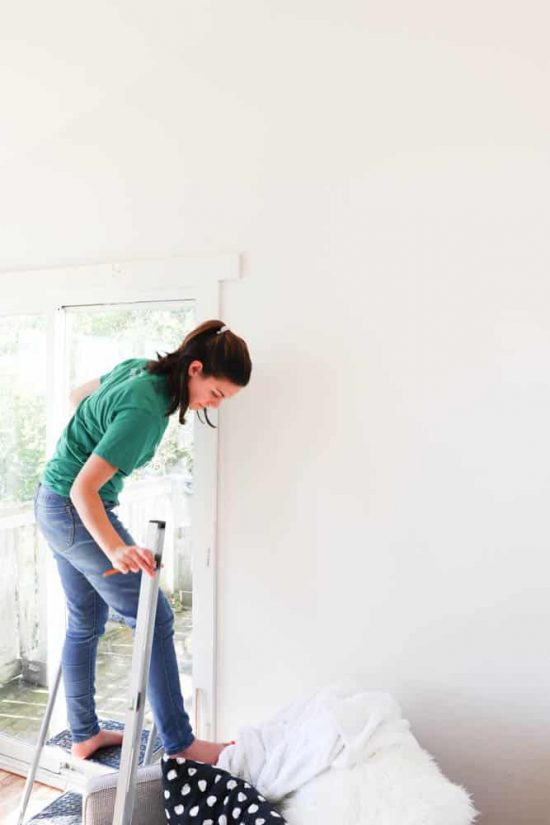 Step one is to measure your wall(s) and decide on the size of your squares. At first, I was going to do 6″ squares and realized that would be way too busy and time consuming. My squares are 9″ and I think it’s just right.

Because I’m working into a corner, 12″ would likely have looked too squishy. If you have a nice long and wide wall, 12″ squares would probably look fabulous. 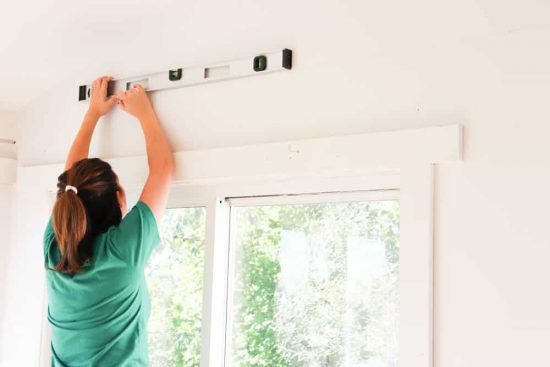 I started in the corner and measured out 9″ from there and then drew a straight line up and down. I did all my vertical lines first. I then measured 9″ above my door frame and used that as the ‘top’ of my plaid pattern and drew my horizontal lines starting there.

This picture is probably hard to see, but if you look closely you can see the faint pencil lines I made on the wall and the way they intersect. 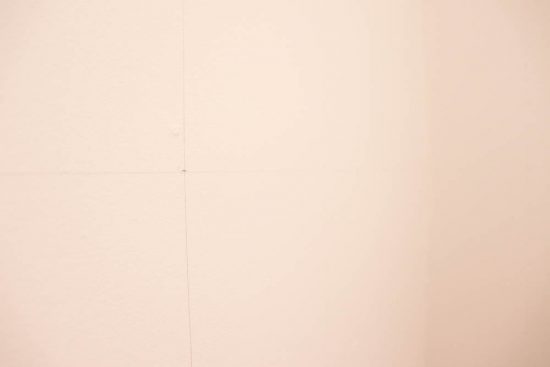 Taping the squares for the plaid pattern

Now is the taping part. Holy moly. This part was the most time consuming and you have to really be ready to feel like a jack in the box, because you’ll be up and down on that step ladder A LOT. 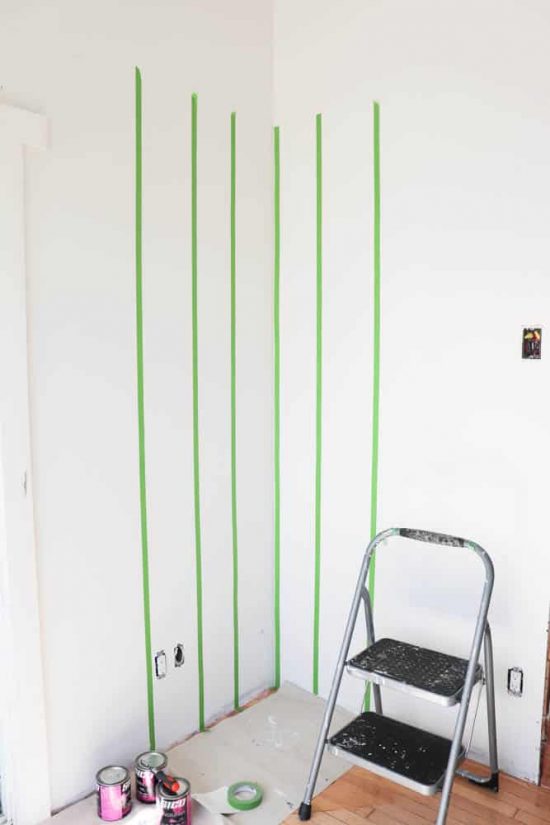 Once again, I started with the vertical lines. Looking at the photo above and starting from the left most piece of tape, you need to:

And so on. This will form the right size squares in the right pattern. If you don’t pay attention to the side of the line the tape is blocking, you will end up with weird shaped squares and your plaid pattern will look messed up.

The next step is to tape off the top of your pattern (or the ceiling), connecting the tops of the vertical lines that are each on the OUTSIDE of the lines. The photo does a better job of explaining it. 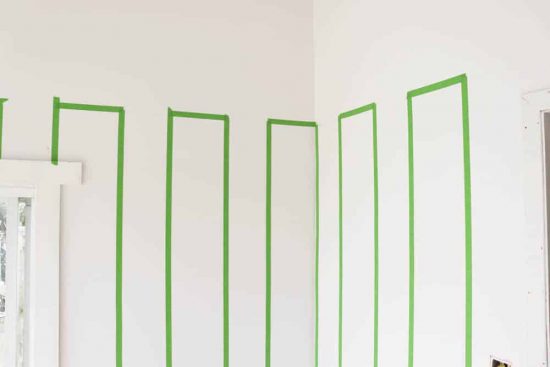 Now use your darkest colour and paint the top square of every blocked off portion and then go down each vertical column painting every other square in that darker colour. 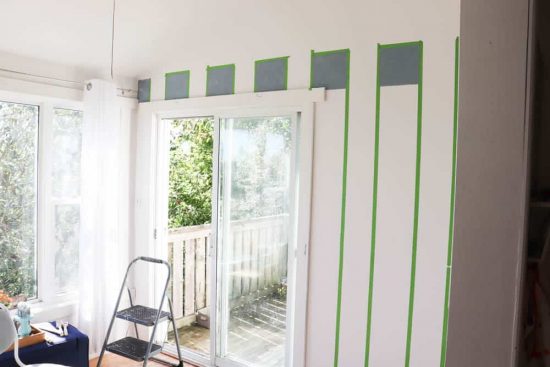 You’ll very quickly see how a plaid wall pattern is really just columns of squares! To think of it another way, a gingham or plaid is like weaving a dark colour in with a lighter colour. The first column is the darkest two colours and the second is the lighter two colours and then it’s just a repeat of that. 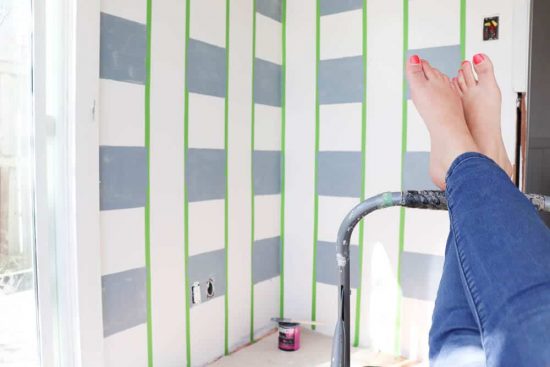 Now tape off the top of each square and paint the inside squares in your second darkest colour. 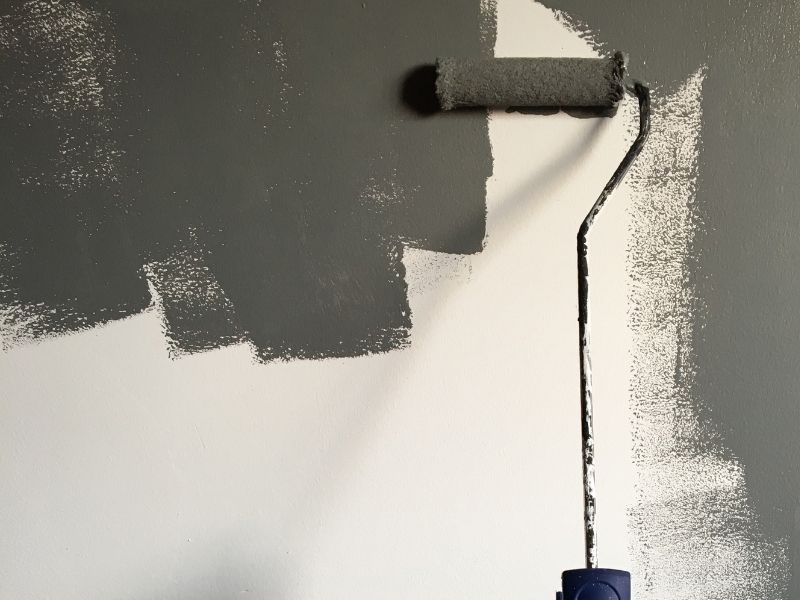 And the final step is to tape off the remaining unpainted columns, painting the squares beside the darkest squares in your lightest colour and leaving the remaining ones white. 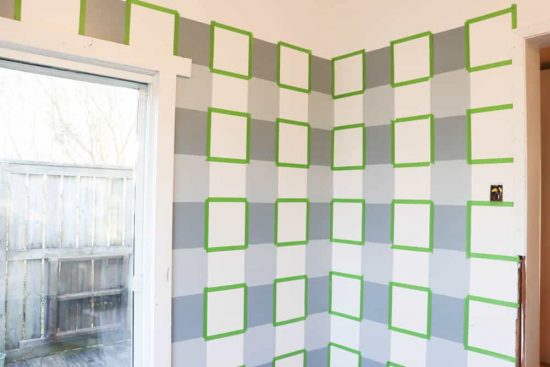 How to Get Crisp Paint Lines

A few tips to use as you paint to make sure your paint lines are nice and crisp! First things first is to use a high quality painter’s tape. There are a lot of crummy tapes out there (I know because I’ve tried to penny pinch and use them) and there truly is a quality difference between the $6 roll and the $10 roll.

For this project, I used an ENTIRE roll of 1″ Frog Tape. Trust me when I say that if you’re going to spend the time on an accent wall like this, you want to have good tape. (I added a YouTube video at the bottom of this post with a dude testing out all sorts of painter’s tapes if you want to watch it LOL – I’m glad someone did that comparison!) 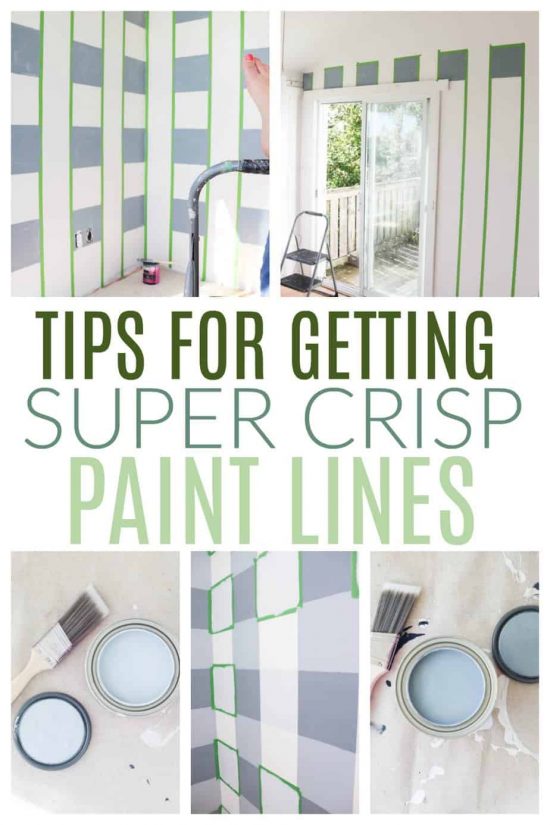 Secondly, you never want to push the tape onto the wall too hard, always use a light touch. Once it’s in place, run over the tape with your thumb and fingernail to make sure it’s nice and secure and straight. It sometimes helps (gasp!) to lick your finger and then run it over the tape too! LOL

Lastly, make sure you’re pulling the tape off while the paint is still quite tacky – especially for a project like this. Pull the tape in the direction of the desired paint line too. So that means angling your hand as you pull the tape off such that the last side of the tape to be removed is the one that’s touching your crisp line. You want to pull with an even hand and in a steady and slow motion.

Finishing off your plaid wall

The last thing you’ll want to do is touch up any problem areas using a small craft brush and then replace your outlets and utility covers. 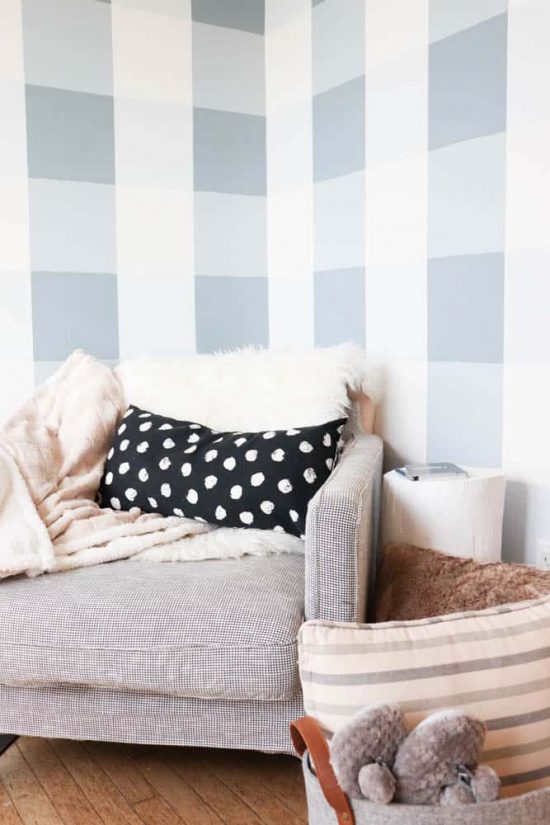 This project really was a labour of love, but I’m obsessed with how it turned out. A lot of people think it’s plaid wallpaper and are amazed when I tell them it’s paint and that I did it myself! 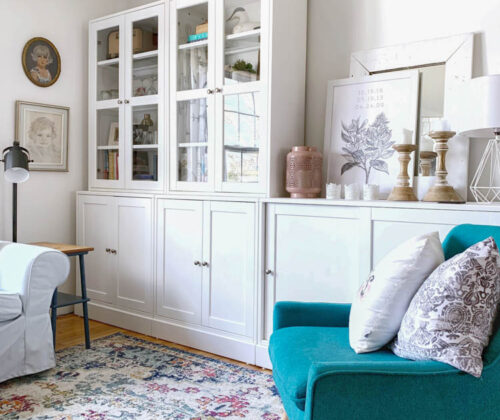 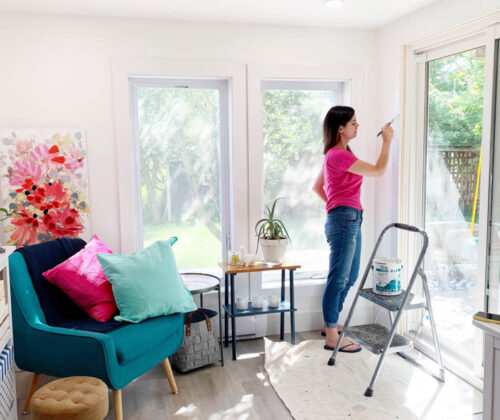