Our Trex Deck Before and After Transformation

Part 9 of our Deck renovation series; showing the before and after of our new Trex deck.

Oh my word! The Home Hardware deck renovation is complete and I could burst with excitement about it all!

This is the first of two ‘reveal’ posts. Here I’m going to break down the before and after for you and show you how we fully transformed the space.

In the next post, I’ll share a bit more about the finishing touches and how we are going to use the deck!

Let’s dig into this epic transformation.

This was the deck we started with.

Not only was it ugly, but it was not functional at all, and it was absolutely unsafe.

From wonky deck boards, to rotting wood, not-to-code balcony supports and not-even-remotely-safe joists and railings – the whole thing just had to go.

And it all started with a safe and very satisfying demolition by the Home Installs team.

But in short order, that ugly duckling deck was transformed into this glowing and oh-so-inviting beauty.

Let’s go top down through the details of this Trex transformation.

From the top deck, the most important improvement for us was the safety element. The new deck was secured to the ground with helical pile-drilled posts and deck footings.

The balcony was installed with proper deck hangers and hardware and the right size and spaced joists.

The balcony is outfitted with Trex decking which has no visible screws or nails! It’s incredible that we went from a deck with actual HOLES in it, to a deck that is smooth like butter!

Obviously the major structural change we made was adding the staircase from the upper balcony down to the ground floor.

I knew it was going to be a difference maker in our lives, but within two days of having the stairs, I realized it is a total game changer.

The kids can come home through the back gate and straight into the kitchen now! It’s incredible.

In order to accommodate the stairs and not lose valuable seating or living space on the deck, our design called for a small landing off the side of the house.

The whole thing feels spacious and the flow is greatly improved. (I mean, before, it was just a wooden wall!)

Down to the lower deck, the improvements continue.

Where the old deck had a weird step out of the door and then a half-step that wasn’t really attached to anything from the under deck to the next level, the new deck is SIMPLE.

The under deck aligns with the door and the bottom of the house and then there’s one step down to the grass level.

I can’t tell you how many times I worried about the kids (or me!) tripping on the old weird step…and now that worry is gone.

Hilarious how much you can appreciate a simple, well-built step, when you haven’t had one for years!

The old deck had a massive gap between it and the bottom of the house (especially under my office addition) and that meant debris (and animals!!) were constantly getting under there. Yes – one time, I had to rescue our cat Louie from under the house because he scurried into the space by the deck. Nightmare.

The new deck eliminated that problem because it comes up flush to the house.

But that means it’s a bit higher off the actual ground, so we built a wrap around step on the end of the deck to account for the extra height.

It looks so good and it makes stepping off the deck onto the grass feel so natural. Both kids have no trouble climbing up and down and the dog has an easy time too. 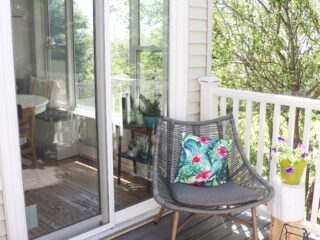 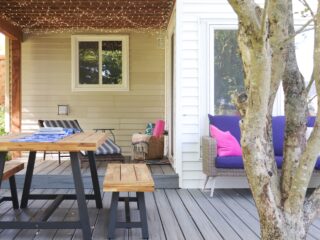