How weird is it that this post – which was supposed to be a simple tutorial post – has turned into one of my most honest bloggy moments of all time?

Recently, we stripped the paint off our upstairs bannister/railing – and it was thrilling. I mean, don’t get me wrong – I still love seeing the way paint can transform a neglected or damaged piece. But there’s something about stripping layers of paint off an old piece to expose its true self that is equally, if not more, satisfying….until and unless that process doesn’t go as planned. As much as this post is a story about Stripping Vintage Wood Furniture of decades of old paint – it’s also about how to know when you’ve just had enough.

Let me explain. And preface all of this by saying that this is not the post I intended it to be.

I have had this two-tiered table for years. I have a major attachment to it. It’s the perfect size. It has exceptional scroll work and it has been in every single apartment or home I’ve ever had. I’ve never been able to bring myself to get rid of it. I just can’t do it.

Over the decades, it has been painted three, if not four times. When I inherited it about twenty years ago, it was a light robin’s egg blue. Then as a pre-teen, I thought I was so smart by painting it lavender purple and creamy white. (At the time, that was fairly a la mode!) Then, in our condo about five years ago, in an attempt to neutralize it, I painted it a celery green – and admittedly did a terrible job.

Since moving here, it has started to chip badly and is not the showstopper I know it can be. I was able to peel these chips off with my finger nails.

I want this piece to have an entirely new life. When I couldn’t decide on what colour or stencil to use on it (after month’s of agonizing) I realized it was because the piece wanted – needed- to be taken back to its roots. I needed to just simplify life for this sweet little end table. Simple is sometimes best, you know?

I decided to try a technique I had read about online recently. I brought it outside and slathered the living daylights out of it with my non-toxic CitrusStrip.

By the time I had made it all over the table, it started to bubble up beautifully. 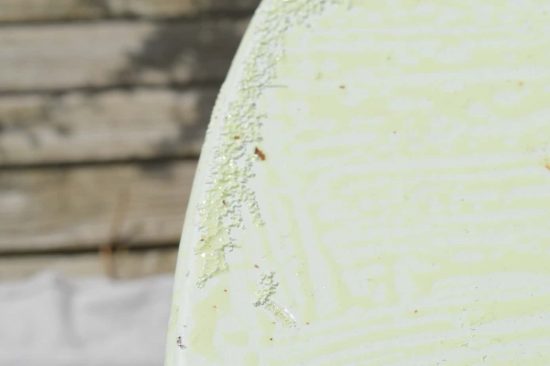 But to speed up the process and make it even easier to strip, I covered the whole thing in garbage bags. And then I left it like that – dripping and terrible  – for about three hours. (See how there’s forsythia in this picture? Ya. Because I started this table in MAY.) 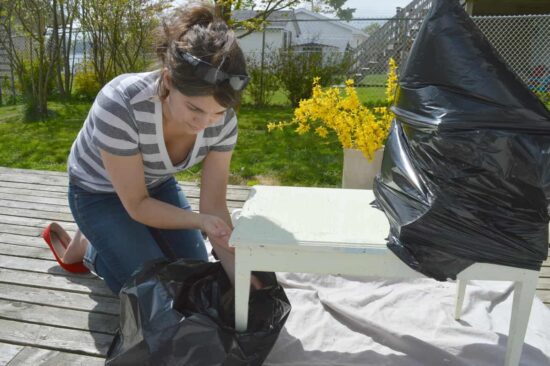 At this point, I was just about ready to give up on this table. I had visions of three hours of waiting and then the paint magically falling off revealing a stunning patina’d wood table beneath. Delusions of grandeur, I tell you. Delusions!

It definitely sped up the process. But there was so much paint. So much.  I went at it with my scraper. Like REALLY went at it. In some spots, I got down to the original blue. Other spots were still stained with my terrible teeny-bopper purple. But in a few blessed (microscopic) areas, the original wood shone through.

So I did the garbage bag treatment again. This time – over night. Like this. 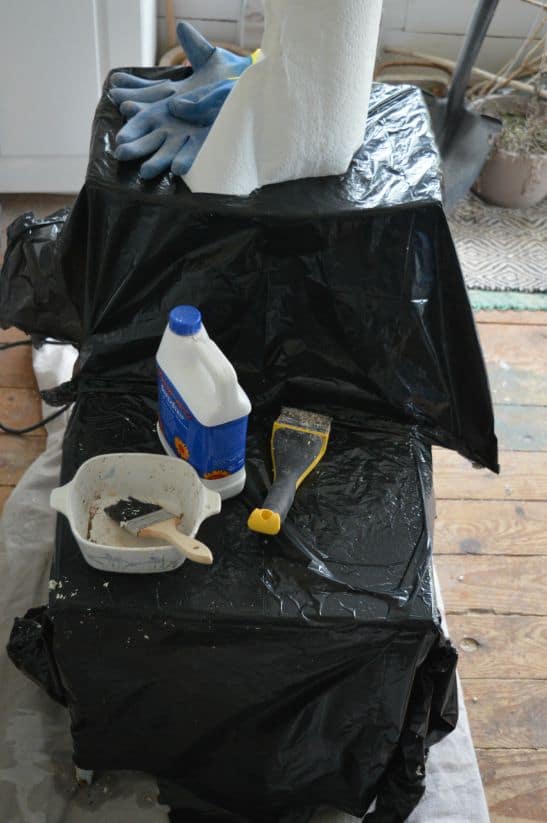 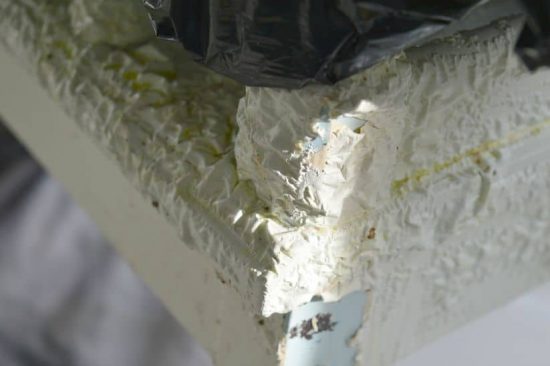 But even though I scraped the living daylights out of it – ultimately, it looked like this. 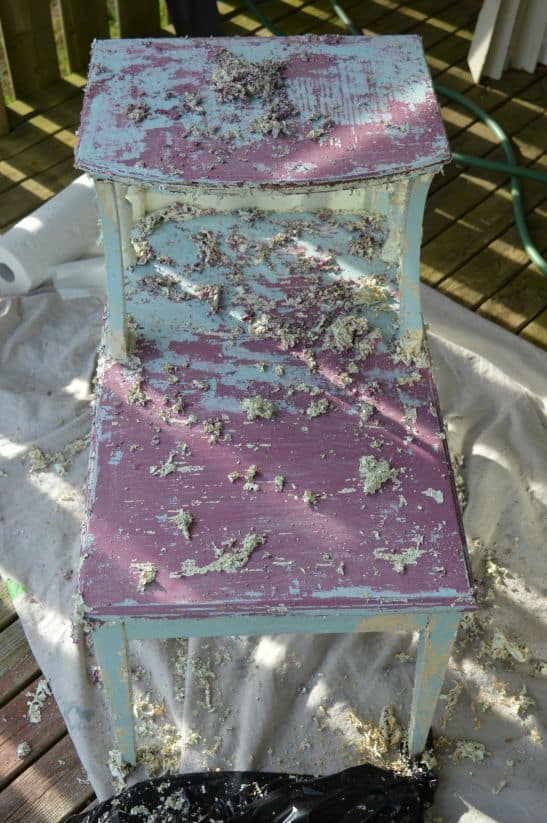 But then I thought about how much it’s given me over the years (yes, I did really think of my table as a person!) and I realized that I should try at least a couple more times to make it sing.

So – I cleaned and dusted off the piece and gathered all the paint goo into a disposable bucket. Then I went at it with my palm sander, using a 50 grit wheel. More of the wonderful started to peek through!

At which point, my sanding discs gave out (I had been re-using some I found, so they didn’t last very long)… and I re-slathered it in CitrusStrip and recovered it in garbage bags. I left it to sit that way in the garden room overnight.

The next day, the entire basement of our house smelled like CitrusStrip and the table – well, if I’m being honest – it looked AWFUL. The overnight soak worked (in theory), but it was becoming clear to me that this little table needed a heck of a lot of work.

I was able to strip and sand the flat surfaces down to the bare wood – but I hadn’t actually considered how I was going to get the layers and layers of paint off the scroll work and corners. 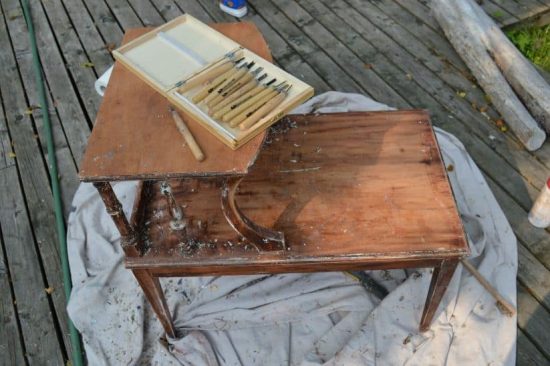 So, it sat in the garden room for another two weeks – looking terrible and saaaaaaad.

When I had finally regained my courage, I brought it back out into the sunshine and Dan had the INGENIOUS idea to strip the remaining bits and pieces using this wood shaving tools. Yes – we have wood shaving tools. And they are THE SECRET to stripping paint off vintage scroll work.

They give you precision you wouldn’t get with a regular paint scraper and all the different sized blades let you dig into millwork and edges really well. Note: I still didn’t say *easily*- because when you’re blade is only 1/8″ wide, you can imagine how long this step took me. 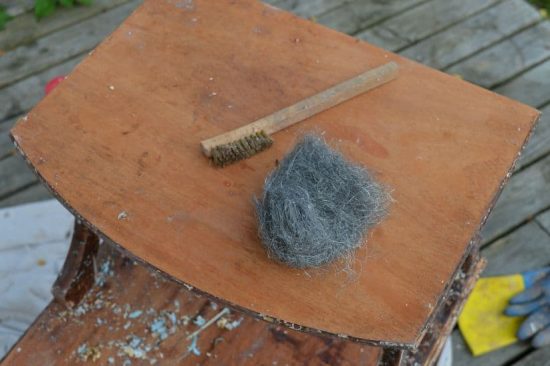 After an afternoon with the wood blades, I sanded it all down with high-grit steel wool. This stuff gets into grooves where sand paper just can’t go.

One final dousing with CitrusStrip and a few more passes with my wood tools and I figured that was as pretty as she was going to get.

And then I did the unthinkable.

I let it sit. In the garden room for another TWO MONTHS.

Why? Because I just wasn’t happy with how it looked. Despite all my efforts – she just didn’t polish up the way I had imagined. And somewhere along the way – I fell out of love with my beloved table. (Let’s not even get into the guilt I felt over putting so much emotion and energy into a piece only to let it languish in the most unkept room of our house covered in dust and paint particles and goodness knows what else.)

One Friday I decided it was time. Fish or cut bait. Poop or get off the pot. Deal with this table or own up to the fact that I had royally screwed up and was either going to have to get rid of it or just paint the damn thing and forget about all those hours of agonizing and painstaking work.

I kind of did a blend of all of those three things.

I grey washed it.

How’s that for a metaphor for indecision? (hint: perfect) 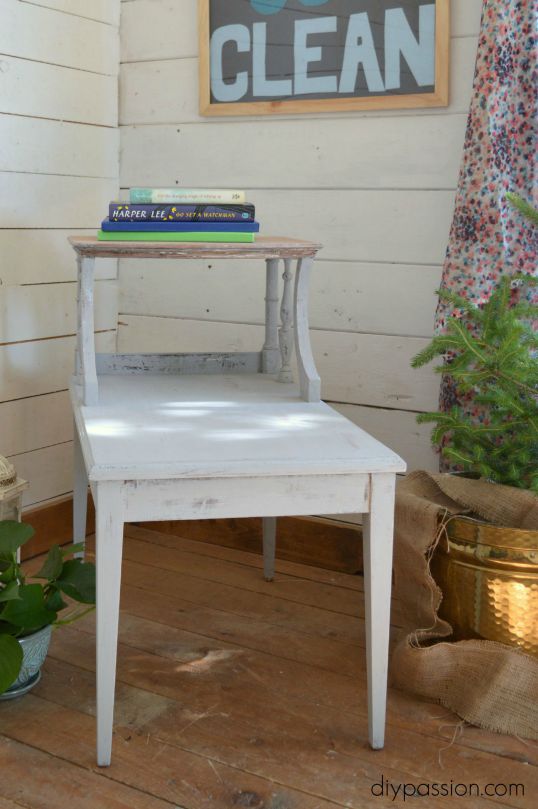 I used Annie Sloan’s Paris Grey. I diluted the bananas out of it with cool water and I wiped it on liberally and wiped it off vigorously as it was soaking into the porous wood of my table. 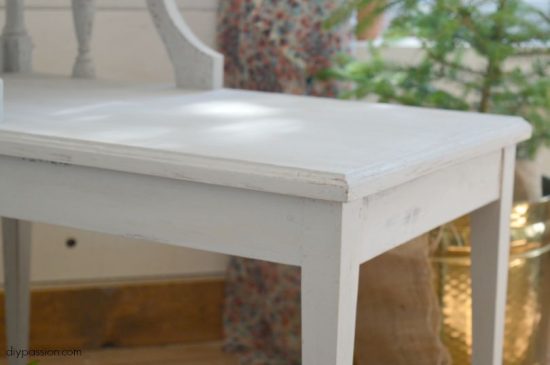 Now at least it looks distressed on purpose. Rather than in distress because I was a moron.

After one round of great washing, I knew it just wasn’t going to be enough to cover the damage. So I ended up painting the body and leaving the top layer natural. The gray wash on that brought down the red tone and wood and now I quite like it. 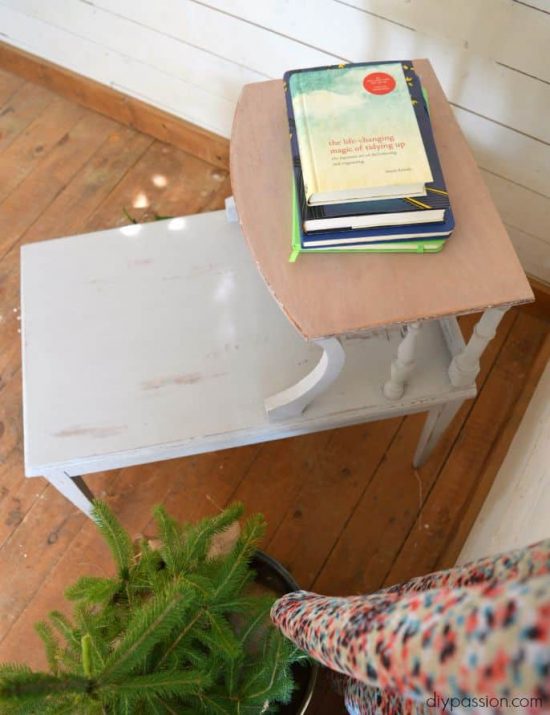 In fact it sort of has a French feel. And it’s definitely beachy.

It also definitely took me way too long to make a decision about this table. 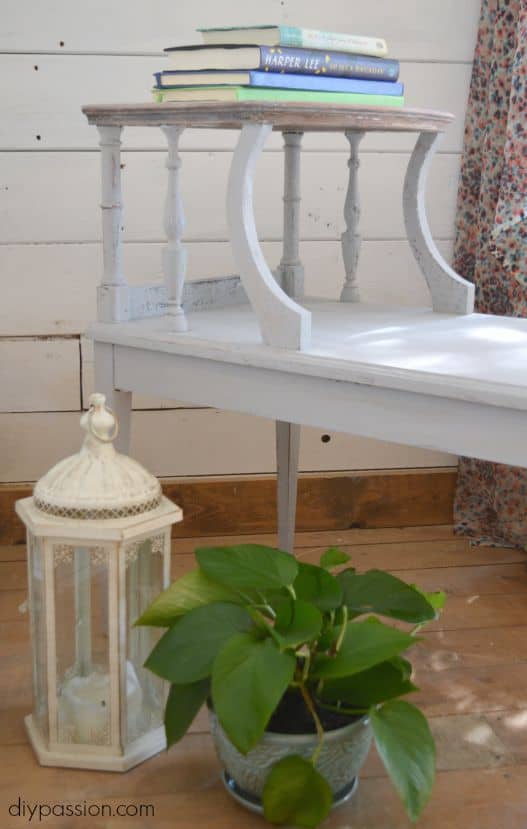 But you win some and you lose some, right?

Later this week – we’re planning to give you an update on our DIY Kitchen One Year later. We often get questions about how well our improvements have held up and what our plans are for next steps in that space – so we’re excited to share that with you. And I’m still putting the finishing touches on our newest thrifty purchase – the vintage waterfall desk.

You also may have noticed a book on the table in this post – The Life Changing Magic of Tidying Up. It’s by Marie Kondo and it is changing our lives. Very soon (early September) we are teaming up with some other bloggers to ‘KonMari’ our home and our lives and we’re going to blog about it all. Can’t wait 🙂 (We even went out and bought giant cardboard boxes and plastic bins so we can get to it right away!)

Hope you’ve had a great weekend. 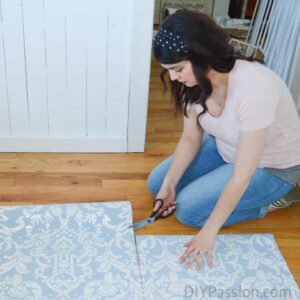 How to Hang Wall Paper

I recently purchased a table with a print glued on the top. I like the print, but years have turned it yellow and dull. Is there a process that will keep the print, but brighten it? I do not dare use stripping material.

I recently purchased a table with a print glued on the top. I like the print, but years have turned it yellow and dull. Is there a process that will keep the print, but brighten it? I do not dare use stripping material.

I think it's beautiful, Erin! I really like the way the gray paint and gray washed wood look together. It's a gorgeous color. Give yourself some more props, girl.

I recently had a similar project (complete with paint stripping disaster) that took me months to complete as well. It can be exhausting and frustrating when your vision just doesn't want to come together like you hoped. I think however that your sweet little tabled turned out wonderful! Great job!

Dude, that hard work TOTALLY paid off because it looks amazing now!!! It is very much a win, not a draw :)