Framing up the two-storey deck

Part 3 of our Deck renovation series; looking at the various lessons in reframing our deck and what we learned about the building process

When you think about it, your deck structure is only as solid as the frame.

And truth be told, I had never given it much thought before we started down this deck renovation path!

But once I started looking into how awful the old deck was, I quickly developed a new appreciation for what goes into framing up a deck and all the little considerations to take into account.

Oh, where to begin!

The old deck was just one hazard after another. But let’s break this down into the nitty gritty.

I will suggest a caveat here that should be obvious, but I am not a building or structural engineer, nor am I a city inspector. So obviously, if you have questions about your deck framing or safety, consult a professional in your area.

In no particular order, the red flags in the old framing:

Funny tidbit? When the city inspector came to look at the new framing and give us the stamp of approval, I told him about the sad state of the previous deck. I showed him a picture on my phone and he said,

“Erin, I used to be a builder before I was an inspector. Sometimes, structures that shouldn’t be standing are only standing because of the sheer force of will and that’s it.”

This process has given me a new appreciation for building codes and procedures. Yes, they can add some time and a small amount to the budget, but knowing that everything has been built properly for the long term gives me such peace of mind.

I’ll also say that we loved that our Home Installs team took care of the entire inspection process for us. From submitting the building plans and pulling the permits, to coordinating the inspector visits and submitting the final engineering plans to the city.

It was so nice to know all that paperwork was done for us without us needing to worrying, or even understanding the red tape process.

Let’s get back to the red flags in the old deck:

I could go on and on. But you get the picture. The old structure was terrible in every way.

As you saw in my last post, the framing process really started with the drilling of the foundation piles.

Those are super sturdy!! And hot tip – if you do use a Helical Drill like this, it’ll save you time and likely save you needing a second inspection. (Again, double check this in your city).

But in our case, because we didn’t have to hand dig the deck’s foundation, the inspector only needed to come by once, which saved us a day or two on timelines!

I felt so silly snapping a picture of the underside of the new deck, but just seeing the proper hangers and bolts made me instantly feel at ease.

Laying Down the Trex Decking

Once the frame was built for the upper deck and the new staircase, the Trex decking went in like a breeze.

One benefit of the Trex decking install is that it’s so straightforward. I had mentally prepared myself for a lot of hammering and sawing in the yard for a couple of weeks – and this decking doesn’t install with hammers!

In my next post, I’ll share more about why we chose a Trex system for our deck and more benefits of this product… besides the fact that it’s dreamy and gorgeous! 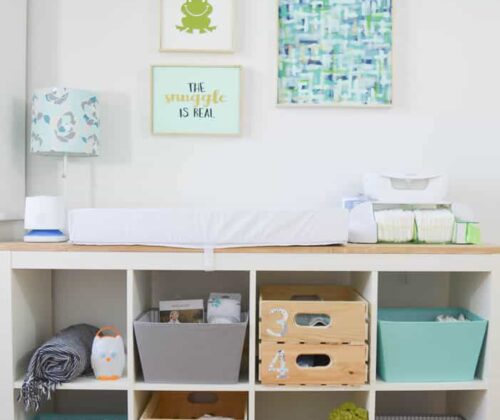 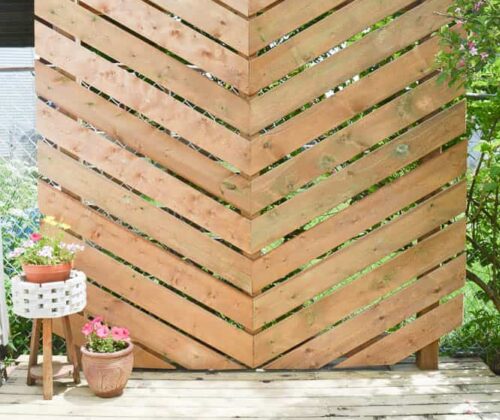 How to Build an Outdoor Chevron Privacy Wall (STEP-BY-STEP)